WE CHALLENGE THE STATUS QUO TO PROVIDE
OUR CLIENTS WITH SPECIALISED, ADAPTIVE,
ONE-STOP DRILLING SOLUTIONS

WHO IS MASTER DRILLING?

Master Drilling, established in 1986, is a global drilling technology solutions driven company; focused on delivering a fully mechanised range of services to the mining, infrastructure and energy sectors. As the trusted partner of choice, our business model is characterised by cutting-edge technology, innovative solutions and tailor-made designs, coupled with a flexible support and logistics chain. We partner with our clients during every project touchpoint - from the exploration phase to the production and capital stages.

Our leading experts and advisors are able to provide a solution for every operational challenge - be it access, transportation, ventilation or analysis - focusing on the continuous research and development of new techniques and methods.

HOW WE DO IT

We service our clients by conceptualising,
developing and delivering the equipment
they need, with a firm focus on ongoing
support and continuous portfolio innovation.

We are right where you need us...

Master Drilling is a global business, focused on leveraging growth opportunities in key markets. We tailor solutions
to meet the specifc conditions and geographical challenges faced by our clients.

Our interaction with clients is informed by our organisational values and behaviours:

We value our customers, providing only the best expert advice and tailored solutions for all client requirements, welcoming varying viewpoints and contributions

We challenge the status quo and proactively seek out new, different or more effective methods in order to improve performance and service delivery

We believe in the safe, compliant and reliable delivery of our operations

We utilise tools, technology and resources to maximise efficiency and effectiveness; delivering on time and on budget

The idea for the formation of Master Drilling was born in the Northern Cape province of South Africa when Danie Pretorius, the company’s founder, identified a gap in the sector for innovative raiseboring related services. Combining his engineering background, experience and a network of acquaintances in the mining industry, he realised that the time was right to venture out and start a business of his own. Master Drilling then went on to sign its very first contract with Elandsrand mine, close to Carletonville (west of Gauteng).

A year after Master Drilling was established, Cullinan Mine (formally Premier Mine situated near Pretoria in the Gauteng Province) requested a specially designed machine for one of its projects - one that was able to drill through passes and one that would be a true test for Master Drilling’s technology. With a limited budget, Master Drilling was able to design and build the rig, a first of its kind in South Africa. This triumph marked the start of an 18-year relationship as well as the accelerated growth of the company within the mining sector.

The decision was made very early on to diversify [IB4] Master Drilling’s operations; focusing on key expansion opportunities and partnerships. Its move into South America, and subsequent organic growth, created a solid platform from which to extend the business. This led to Master Drilling’s footprint expanding to Peru, Brazil, Chile, Mexico, Zimbabwe, Zambia, the Democratic Republic of the Congo (DRC) and Burkina Faso Today, the company operates across more than 20 countries, spanning multiple regions) .

The fundamental success of the company resulted in a listing on the Johannesburg Stock Exchange (JSE) in 2012, opening a broader investor base and allowing Master Drilling to accelerate its growth ambitions as a multinational leader in drilling technology services. 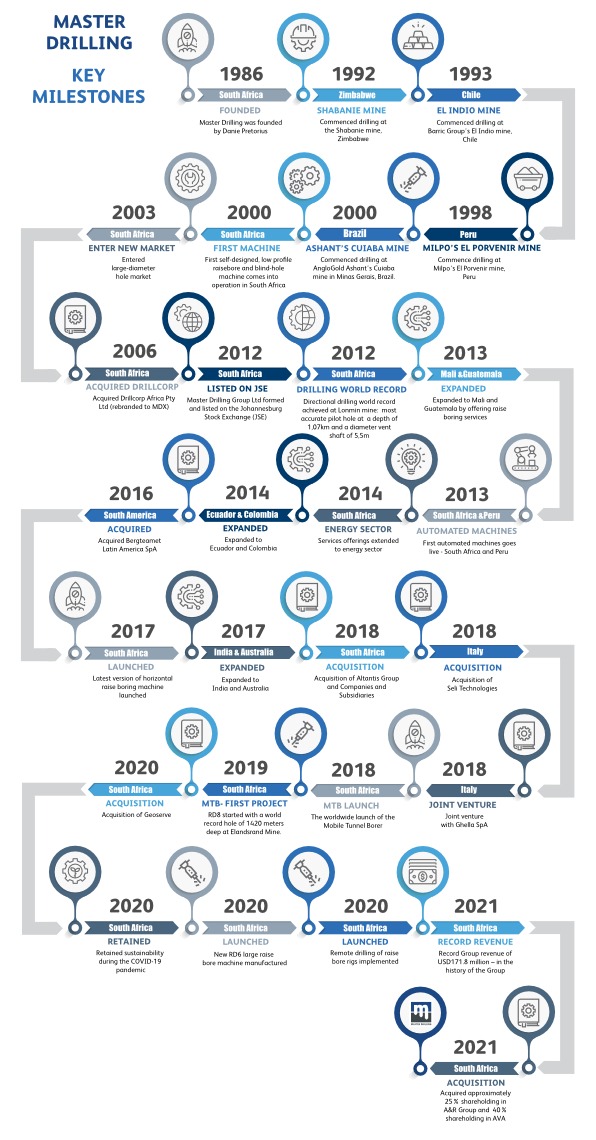 Our aim is not only to comply with stipulated health and safety codes but also to continually exceed the targets we have set for ourselves as a global business and a good corporate citizen. This means a focus on:

Our philosophy focuses on the following components: 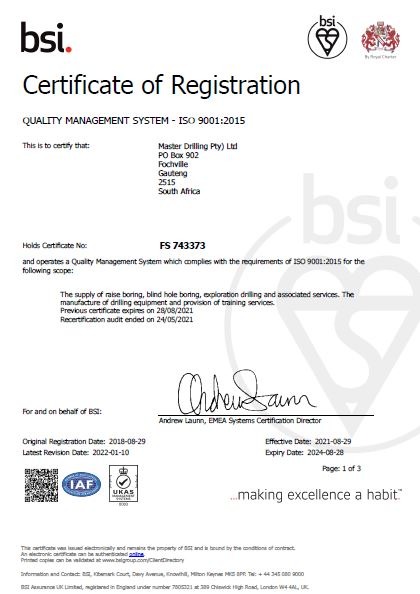 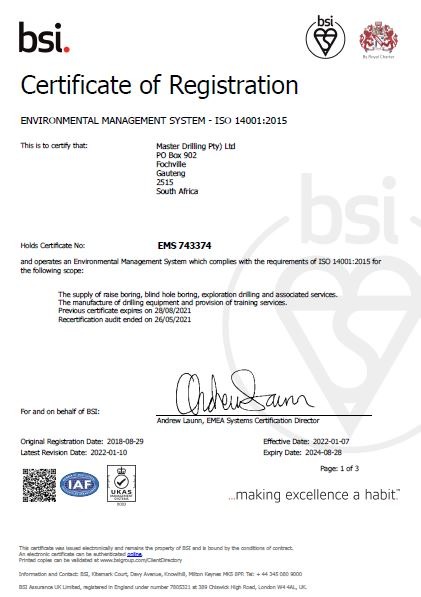 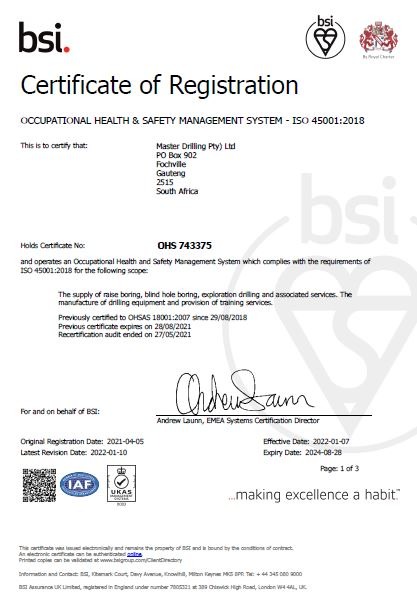 View our services
Scroll To Top